The Potrerillos Concession comprises 12 square kilometers (“km”) of sub surface mineral rights and is contiguous to and along strike from Mako’s San Albino gold project in Nueva Segovia, Nicaragua (“San Albino”). As a reminder, the Potrerillos Concession is part of the numerous historical mines and workings existing within the Corona de Oro Gold Belt, which is approximately 3 km wide by 23 km long and spans the entirety of the Company's land package (see attached maps).

Based on available historical data, as well as reported results from the previous owner, gold mineralization on the Potrerillos Concession occurs within mineralized, shallow dipping quartz veins, that are on strike with and very similar to the veins at San Albino.

The reconnaissance exploration program completed by Mako to date includes preliminary geological mapping, sampling and prospecting. A high-resolution ground LIDAR survey over the entire concession is also in progress.

The primary goal of this work is to collect key structural data of the mineralized veins, shear zones, faults and locations of historical surface and underground workings, which will assist in a detailed interpretation of the gold mineralized at the Potrerillos Concession in anticipation of launching a drilling campaign.

Preliminary prospecting and mapping on the Potrerillos Concession to date has exposed at least nine prospects with similar characteristics to San Albino (see attached maps).

Importantly, the Company’s geologists believe that the newly identified prospects on the Potrerillos Concession represent a mineralized trend link between San Albino and several prospects within the San Albino-Murra Concession along a northeast striking trend that runs for approximately 9.5 km.

Akiba Leisman, Chief Executive Officer of Mako states that, “the acquisition of Potrerillos in late 2019 was important for Mako. The concession was the missing puzzle piece that links San Albino to previously identified prospects to the northeast. The next step will be to drill test the approximately 3.5 km of potential strike length identified from the ongoing reconnaissance exploration program at the Potrerillos Concession. These high-grade results further support our view that San Albino is part of an orogenic gold mining camp.”

The Cerro Piedras Negra prospect is situated approximately 380 m north of San Albino. This prospect is comprised of two collapsed adits, ten hillside cuts, two small pits and eight relatively small adits, which appear to be following a vein over a distance of 1,300 m. In total, 20 samples were collected, mostly from historic dumps, with gold grades up to 33.30 g/t Au.

The El Callejon prospect is situated just northwest from the Cerro Piedras Negra prospect and is comprised of a collapsed historical adit, a shaft, four historical cuts and five dumps. Sampling of a dump in front of a collapsed tunnel yielded the highest result of 21.70 g/t Au and 175.0 g/t Ag.

The most extensive prospects discovered to date on the Potrerillos Concession are San Antonio, Tambo, El Bijao and Los Potrerillos, which appear to be developed on the same structure with a strike extent of at least 2,500 m. The prospects are centered around quartz veins similar to San Albino with occasional visible gold, galena and arsenopyrite. The veins were initially mined by the Spanish in the 1700’s with later activity in the 1800’s and more recently by local, small-scale miners using manually intensive mining methods.

The Los Pinos prospect appears to be developed on a sub parallel structure approximately 400 m south of San Antonio with a strike extent of at least 1,300 m.  Mapping has identified two collapsed adits, 18 cuts and a dump. A total of 18 samples were collected. The best results came from dumps developed next to hillside cuts returning assays of 55.20 g/t Au and 141.0 g/t Ag and 32.00 g/t Au and 226.0 g/t Ag.

The Los Molinetes prospect appears to be developed on another parallel structure approximately 800 m to the north of San Antonio and is comprised of two collapsed adits, nine cuts, a shaft and two dumps. A total of 13 samples were collected, most of the assays are pending, however a grab sample from a dump in front of a collapsed tunnel returned assays of 56.20 g/t Au and 57.0 g/t Ag.

The Quebrada Grande prospect is situated approximately 500 m north of Los Potrerillos and along strike of the San Antonio, Tambo, El Bijao and Los Potrerillos prospects, extending the potential strike extent to nearly 3 km. A total of nine samples were collected and are pending results. 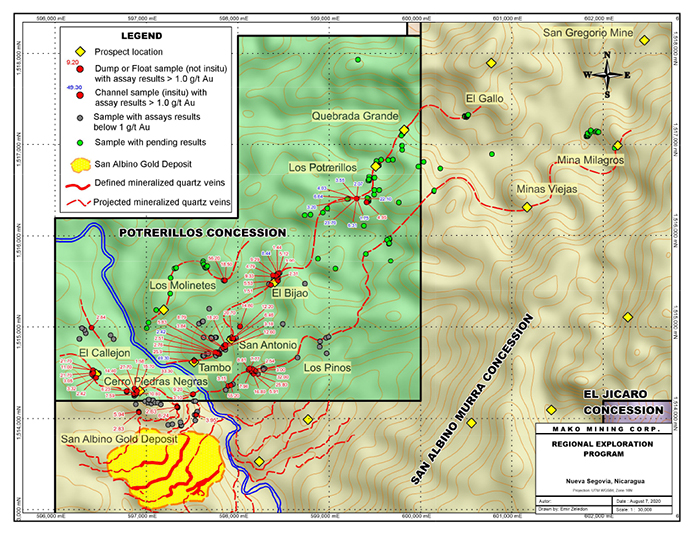 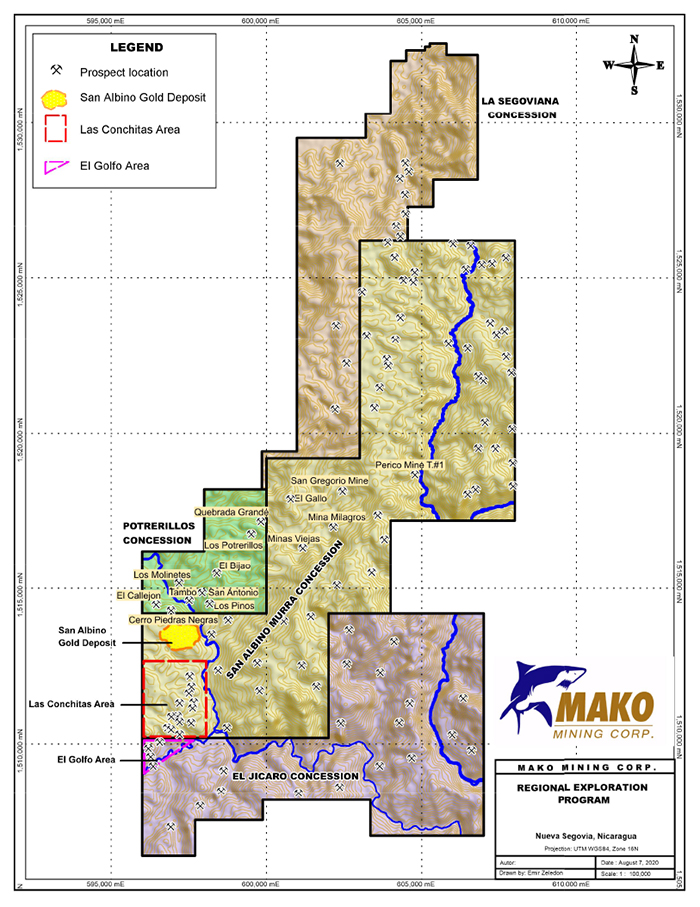 Samples were kept in a secured logging and storage facility until such time that they were delivered to the Managua facilities of Bureau Veritas and pulps were sent to the Bureau Veritas laboratory in Vancouver for analysis.  Gold was analyzed by standard fire assay fusion, 30 gram aliquot, AAS finish.  Samples returning over 10.0 g/t gold are analyzed utilizing standard Fire Assay-Gravimetric method. The Company follows industry standards in its QA&QC procedures. Control samples consisting of duplicates, standards, and blanks were inserted into the sample stream at a ratio of 1 control sample per every 10 samples. Analytical results of control samples confirmed reliability of the assay data.