Mako Mining Corp. (TSX-V: MKO; OTCQX: MAKOF) (“Mako” or the “Company”) is pleased to provide an interim Q4 2022 production update from its San Albino gold mine (“San Albino”) in northern Nicaragua, the announcement of a plant expansion to 600 tonnes per day (“tpd”) with no additional capex, and a general corporate update. Financial results for Q3 2022, including detailed reporting of our operating costs, are expected to be released on November 21, 2022. All dollar amounts herein are expressed in US dollars.

In the Company’s Q3 2022 production results update (see October 21st, 2022 press release), Mako announced that it had rectified the issues which led to reduced recovery rates from March through August 2022 (77% Q3 2022 recoveries vs. 86% expected), and lower throughputs for the quarter which were implemented in order to observe the effects of increased plant residence time on recovery rates (481tpd, including availability, vs. 500tpd expected). The Company is pleased to announce that the plant is now operating significantly above nameplate capacity, with recoveries at expected levels. During October, the mill operated at 539 tpd at 97% availability (4.6% above nameplate capacity), with 85.6% recoveries, and 3,518 ounces of recovered gold (see Table 1). 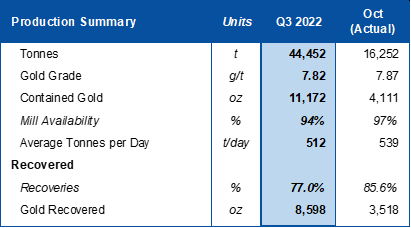 In November, the Company commissioned a pre-leach thickener circuit that will allow for higher material density, allowing increased throughput rates without sacrificing any residence time. The pre-leach thickener will also result in optimized cyclone performance due to a reduced cyclone feed density which will improve leach circuit performance. By the end of the quarter, Mako expects to be operating at 600 tpd with no additional capex and minimal recovery losses.

Akiba Leisman, Chief Executive Officer of Mako states that, “Q4 is starting out very strong, and we now expect record gold sales at San Albino. Now that the recovery issues from March through August have been fully resolved, it is clear that the plant can operate at substantially higher throughputs than what it was originally designed for without the need for any additional capital. After the relatively weak Q2 and Q3 quarters, this will have a significantly positive impact on costs, cash flow and earnings beginning this quarter.”

The Company’s Q3 2022 financial statements and management discussion and analysis are expected to be filed on Monday November 21, 2022. As mentioned above, the 9% reduction in recoveries vs. expectations, the 4% reduction of plant throughput in order to increase plant residence time, and the last shipment of gold being sold after quarter end, meant Q3 gold sales were approximately 1,700 ounces less than what they would have otherwise been, lowering mine operating cash flow by 15-20%, and increasing AISC1 to approximately $1330/oz, including corporate overhead.

Given the performance of the plant in the current quarter, which we expect to continue for the foreseeable future, AISC will be reduced by approximately $200 per ounce beginning in Q4 2022.

(1) Refers to a Non-GAAP financial measure within the meaning of National Instrument 52-112 – Non-GAAP and Other Financial Measures Disclosure. For further details and a reconciliation to the closes IFRS measure, please refer to information under the heading “Non-IFRS Measures” in the Company’s Management’s Discussion and Analysis for Q3 2022 available at www.sedar.com.

In October 2020, Mako published its National Instrument 43-101 Technical Report and Estimate of Mineral Resources for the San Albino Project. A portion of that published mineral resource formed the basis of our non-cash depletion and depreciation calculation through Q3 2022.

Subsequently, the Company has added certain previously delineated mineral resources into a mine plan and identified additional mineral resources within the San Albino mine area, which are expected to increase the base of the estimated tonnes to be depleted going forward. In addition, we expect that a maiden mineral resource at Las Conchitas (which currently has no carrying value) will be incorporated into a separate mine plan beginning early next year. In this context, we expect to see a materially lower depletion and depreciation expense, and a significant increase in net income starting in Q4 2022.

John Rust, a metallurgical engineer and qualified person (as defined under NI 43-101) has read and approved the technical information contained in this press release. Mr. Rust is a senior metallurgist and a consultant to the Company.

Mako Mining Corp. is a publicly listed gold mining, development and exploration company.  The Company operates the high-grade San Albino gold mine in Nueva Segovia, Nicaragua, which ranks as one of the highest-grade open pit gold mines globally.  Mako’s primary objective is to operate San Albino profitably and fund exploration of prospective targets on its district-scale land package.

Forward-Looking Information:  Statements contained herein, other than historical fact, may be considered “forward-looking information” within the meaning of applicable securities laws. The forward-looking information contained herein is based on the Company’s plans and certain expectations and assumptions, including that the Company’s financial results for Q3 2022, including detailed reporting of operating costs, are expected to be released on November 21, 2022; that the Company is on track for record gold sales in Q4 2022; that by the end of the quarter, Mako expects to be operating at 600 tpd with no additional capex and minimal recovery losses; that the additional mineral resources identified within the San Albino mine area are expected to increase the base of the estimated tonnes to be depleted going forward; the expectation that a maiden mineral resource at Las Conchitas (which currently has no carrying value) will be incorporated into a separate mine plan beginning early next year, and depletion and depreciation expenses will be dramatically lower beginning in Q4, thus causing a significant increase in net income starting in Q4 2022;and that the Company can operate San Albino profitably in order to fund exploration of prospective targets on its district-scale land package. Such forward-looking information is subject to a variety of risks and uncertainties which could cause actual events or results to differ materially from those reflected in the forward-looking information, including, without limitation, the risk that the filing of the Company’s financial results are delayed beyond November 21, 2022; that the Company does not achieve record gold sales in Q4 2022 as a result of operations not meeting the expectations set out in this news release; that financial results will not be as expected for Q4 2022; that the October 24, 2022 Measures ultimate have a significant impact on the Company’s Nicaraguan operations; that the Company is not successful in operating San Albino profitably and/or funding its exploration of prospective targets on its district-scale land package; political risks and uncertainties involving the Company’s exploration properties; the inherent uncertainty of cost estimates and the potential for unexpected costs and expense; commodity price fluctuations and other risks and uncertainties as disclosed in the Company’s public disclosure filings on SEDAR at www.sedar.com. Such information contained herein represents management’s best judgment as of the date hereof, based on information currently available and is included for the purposes of providing investors with the Company’s expectations regarding its interim Q4 2022production results at San Albino gold project, and may not be appropriate for other purposes.  Mako does not undertake to update any forward-looking information, except in accordance with applicable securities laws.