The La Segoviana Concession covers an area of approximately 3,845 hectares (approximately 38.5 square kilometers) and is contiguous to the north and northwest of the Company’s San Albino-Murra concession in Nueva Segovia, Nicaragua (see attached map).

Akiba Leisman, Chief Executive Officer of Mako states that, “we are always working on three objectives simultaneously; commercializing our 500 tonne per day mining operation at San Albino, developing a resource at Las Conchitas to double the size of our operations, and proving that we have an orogenic gold mining district.  Today’s reconnaissance results and those released last year on the Potrerillos Concession are part of an ongoing regional exploration program that will soon include drilling at these and others prospective targets across our approximately 188 square kilometer land package.”

The current reconnaissance exploration program covers the northern portion of the La Segoviana Concession and includes geological mapping and sampling of exposed mineralized veins, local mine dumps and, where safely accessible, underground workings.

The primary goal of this initial exploration program is to collect key structural data of the mineralized veins, confirm the high-grade nature of gold mineralization and map historical surface and underground workings.  This data will be used to prioritize targets for follow-up exploration and drilling.

Initial mapping and sampling at the La Segoviana Concession are confirming the existence of high-grade gold mineralization over a significant strike potential at four prospects including, El Silencio, La Reforma, San Luis-Caballo and Minas America; although, additional mapping is required to determine the true strike and dip of the individual veins.  The prospects cover a linear distance of approximately 6 km.  To date, the grade, attitude, minerology, and width of the veins identified at the La Segoviana Concession are very similar to the veins currently being mined at the San Albino Deposit.  A total of 35 channel samples were collected with 23 samples representing the in-situ vein and 12 samples representing dump material.  The assays range in value from 0.02 to 43.5 g/t Au, with 12 samples reporting over 10 g/t Au and 15 samples reporting 1-10 g/t Au.

The prospect comprises two showings, San Luis and Caballo, approximately 300 m apart, which appear to be developed on the same structure as the La Reforma prospect.  Preliminary mapping and sampling indicate that this is the most extensive historical mining in the area, consisting of narrow tunnels with limited length.  Four historical adits, two pits and a shaft were located and sampled.  A total of 19 samples were collected, highlights of the results include 13.10 g/t Au and 10.7 g/t Ag over 1.5 m and 13.90 g/t Au and 12.9 g/t Ag over 0.5 m.

The area covering the La Segoviana Concession has a long history of mining with many workings dating back to the pre-Columbian and Spanish colonial times.  Historical mining and production occurred in this area in the mid 1800’s to early 1900’s.  Some of the veins outcropping on the concession were developed by artisanal miners (mostly underground), however there is no evidence of large-scale mining activities or underground workings. 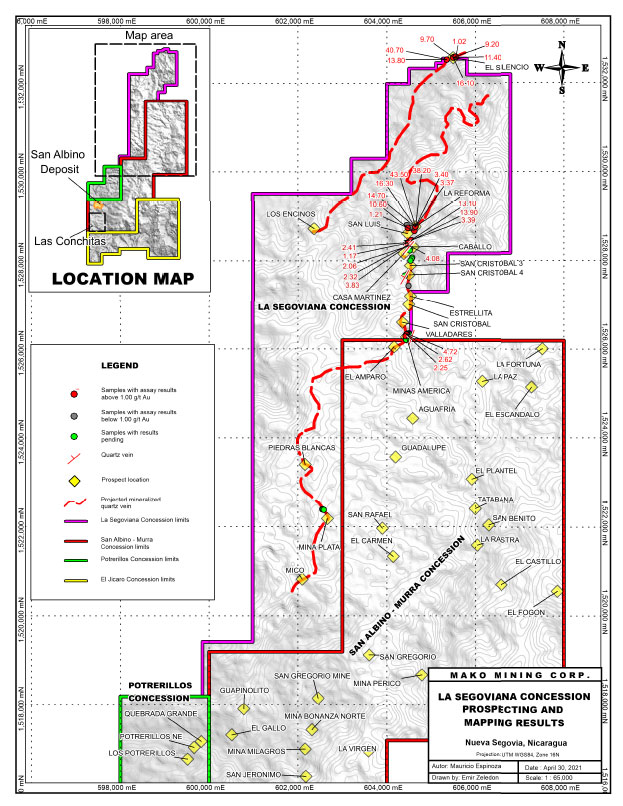 Samples were kept in a secured logging and storage facility until such time that they were delivered to the Managua facilities of Bureau Veritas and pulps were sent to the Bureau Veritas laboratory in Vancouver for analysis.  Gold was analyzed by standard fire assay fusion, 30-gram aliquot, AAS finish.  Samples returning over 10.0 g/t gold are analyzed utilizing standard Fire Assay-Gravimetric method.

Forward-Looking Information:  Some of the statements contained herein may be considered “forward-looking information” within the meaning of applicable securities laws. The forward-looking information contained herein is based on the Company’s plans and certain expectations and assumptions, including commercializing its 500 tonne per day mining operation at San Albino, developing a resource at Las Conchitas to double the size of its operations, and proving that the Company has an orogenic gold mining district in Nicaragua; that the ongoing regional exploration program will soon include drilling at the Potrerillos Concession and other prospective targets across the Company’s approximately 188 square kilometer land package; being able to collect key structural data of the mineralized veins, confirm the high-grade nature of gold mineralization and map historical surface and underground workings, and to be able to use the data to prioritize targets for follow-up exploration and drilling; continuing to obtain positive results from Mako’s ongoing reconnaissance exploration program on its recently acquired La Segoviana Concession, including the various prospects on the La Segoviana Concession. Such forward-looking information is subject to a variety of risks and uncertainties which could cause actual events or results to differ materially from those reflected in the forward-looking information, including, without limitation, that the Company does not continue to find positive results from its reconnaissance exploration program and proposed follow-up exploration on the concessions; that further exploration and assays results do not confirm continuity of mineralization as expected; political risks and uncertainties involving the Company’s exploration properties; the inherent uncertainty of cost estimates and the potential for unexpected costs and expense; commodity price fluctuations and other risks and uncertainties as disclosed in the Company’s public disclosure filings on SEDAR at www.sedar.com. Such information contained herein represents management’s best judgment as of the date hereof, based on information currently available and is included for the purposes of providing investors with the Company’s plans and expectations regarding the exploration of the La Segoviana Concession, and the potential for expansion of the mineralization at San Albino, and may not be appropriate for other purposes.  Mako does not undertake to update any forward-looking information, except in accordance with applicable securities laws.