The goal of the 2018 drilling program at Las Conchitas was to confirm the sub-surface down-dip continuation of mineralization encountered in trenches and to test for additional veins within the area. The Company has completed 49 shallow drill holes totaling 2191.74 metres.  This press release contains results from the 30 holes for 1,367.19 metres drilled into the San Pablo, Mina Francisco, Intermediate and Las Dolores Zones (see the attached map). The results from the remaining meterage will be released once final assays are received and which are expected within the next two weeks.

Highlights to date from 2018 drilling at Las Conchitas include:

Highlights from trenching and underground sampling at Las Conchitas, within this press release, include:

Kevin Bullock, Mako Mining’s CEO stated “We are pleased with the 2018 drill program at Los Conchitas in that the results support our view that there is potential to find further high-grade, open pittable, mineralization along the Corona de Oro Gold Belt. These results at Las Conchitas have only tested the very near surface mineralization at quite a shallow depth.”

The conceptual model for the Las Conchitas mineralization consists of multiple parallel quartz veins that dip gently to the northwest, associated with extensive shear and fault systems which represent feeders for mineralized fluids and a favourable environment for precious metal deposition. These characteristics are consistent with the model for orogenic gold-bearing veins which often extend to depths in excess of several kilometres.  Drilling at San Albino Gold Deposit has already established down-dip continuity of gold mineralization for over 900 meters and it still remains open.  Gold mineralization is not restricted solely to quartz veins, but also occurs in the host rock (phyllite/schist) containing quartz veinlets.

The initial target in the drilling program at Las Conchitas was the San Pablo Zone – the first of six zones which the Company drilled in 2018. Six vertical drill holes and an angle hole were completed in the San Pablo Zone.  The program was designed to confirm the continuity along a strike length of 250 metres and to test the down dip extent of the San Pablo mineralized structure (see detailed map). All drill holes intersected the mineralized zone at approximately 30 metres vertical depth.  The zone lies within a highly altered shear zone and it appears to be brecciated, containing quartz stringers and quartz fragments.  Hole SP18-03 gave the best drill result of 6.0 metres averaging 4.13 g/t gold and 3.8 g/t silver.  This hole intersected an interval of gold mineralization within shattered quartz veins, quartz breccia phyllite/schist containing quartz veinlets. The complete 2018 Exploration results in this release are available on our website at www.makominingcorp.com.

Another trench was excavated to test an anomalous soil geochemical target situated approximately 100 meters west of the San Pablo Zone.  Trench SAM18-TR-31 exposed a vein parallel to the strike of the San Pablo mineralization and where the sampling returned 4.0 metres of 22.70 g/t gold and 30.6 g/t silver (along dip) and 1.0 metre of 33.94 g/t gold and 98.1 g/t silver (vertical).  This newly discovered zone was named the Tirado Zone after the name of a collapsed tunnel situated approximately 130 metres, along strike northeast of the trench.  This new zone clearly demonstrates the potential of discovering additional vein structures within the Las Conchitas area, very similar in nature to the one outlined at San Albino.

The best drill result at the Mina Francisco Zone was 2.0 metres @ 2.56 g/t gold and 7.2 g/t silver in drill hole MF18-11.  Mina Francisco drilling in 2018 did not duplicate results from previous drilling and trenching.  This zone needs to be re-examined and additional drilling is required to fully assess the zone and to determine if mineralization can be expanded and traced northwest from the historical underground working.

For a list of 2018 exploration results announced in this press release, please see the tables titled “2018 Las Conchitas Drilling and Trenching Results” available on our website at www.makominingcorp.com.

The mineralized intervals shown above utilize a 1.0 g/t gold cut-off grade. The results presented above are preliminary in nature. There has been insufficient exploration to date to estimate a “Mineral Resource”, as such term is defined in National Instrument 43-101 “Standards of Disclosure for Mineral Projects”. There is no certainty that further exploration will result in the identification of Mineral Resources.

The Company follows industry standards in its QA&QC procedures.  A certified standard sample, or a blank or a field duplicate sample is inserted every 10 samples before the set of samples are sent to the Laboratory.  This procedure is applied to all drill and trench samples.

John M. Kowalchuk, P.Geo, a geologist and qualified person (as defined under NI 43-101) has read and approved the technical information contained in this news release. Mr. Kowalchuk is a senior geologist consulting to the Company.

Mako Mining Corp. (“Mako” or the “Company”) is a publicly listed gold mining, development and exploration firm. It operates the producing La Trinidad open-pit, heap leach gold mine in Sinaloa State, Mexico and is developing its San Albino gold project in Nuevo Segovia, Nicaragua. Mako’s primary objective is to bring San Albino into production quickly and efficiently, while continuing exploration of prospective targets in both Mexico and Nicaragua.

Currently, Mako is exploring for gold and silver mineralization on more than 60,200 hectares (602 km2) land holdings in Sinaloa State, Mexico and on 13,771 hectares (138 km2) at the San Albino-Murra and El Jicaro properties, both in Nueva Segovia, Nicaragua. The Corona de Oro Gold Belt, approximately 3 kilometres wide by 23 kilometres long, contains hundreds of historical mines and workings and spans the entirety of the Company’s Nicaragua land package. 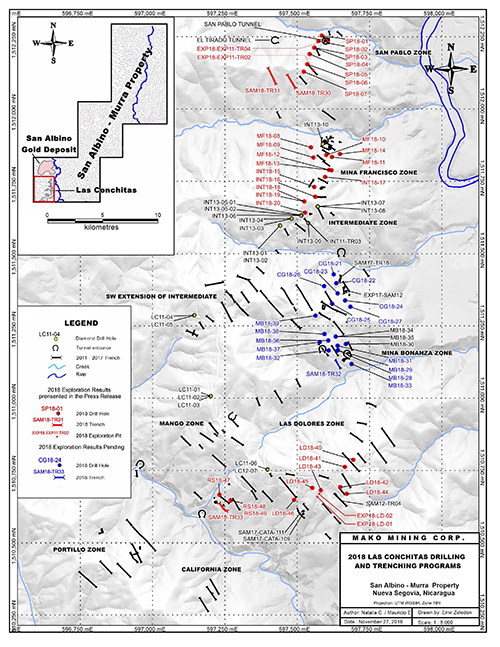