Mako Mining Corp. (TSX-V: MKO; OTCQB: MAKOF) (“Mako” or the “Company”) is pleased to announce that its wholly-owned Nicaraguan subsidiary, Nicoz Resources, S.A., has been granted a new concession by Nicaraguan Ministry of Mines and Energy (“MEM”).  The new concession, called La Segoviana, covers an area of 3,845.80 hectares (approximately 38.5 square kilometers) and is contiguous to the north and northwest of the Company’s San Albino-Murra concession in Nueva Segovia, Nicaragua (see attached map).

The La Segoviana concession allows for both exploration and exploitation and is valid for a period of 25 years, until March 12, 2045.

Akiba Leisman, Chief Executive Officer of Mako states, “in a time of severe operational stress across our entire industry due to the COVID-19 global pandemic, being granted this additional concession demonstrates Mako’s commitment to Nicaragua for many years to come.  Our first objective is to use the remaining financial resources we currently have to finish construction of San Albino and to continue a targeted exploration campaign at Las Conchitas to the south.  However, once cash flow from the mine begins, we aim to aggressively explore our now 188 square kilometer land package.”

The area covering the La Segoviana concession has a long history of mining with many workings dating back to the pre-Columbian and Spanish colonial times.  Historical mining and production occurred in this area in the mid 1800’s to early 1900’s.  Some of the veins outcropping on the concession were developed by artisanal miners (mostly underground), however there is no evidence of large-scale mining activities or underground workings.

The Company intends to immediately dispatch an exploration crew to La Segoviana, to carry out both a reconnaissance examination of this newly acquired exploration area and to conduct a preliminary sampling of mineral prospects in order to define areas suitable for further exploration. 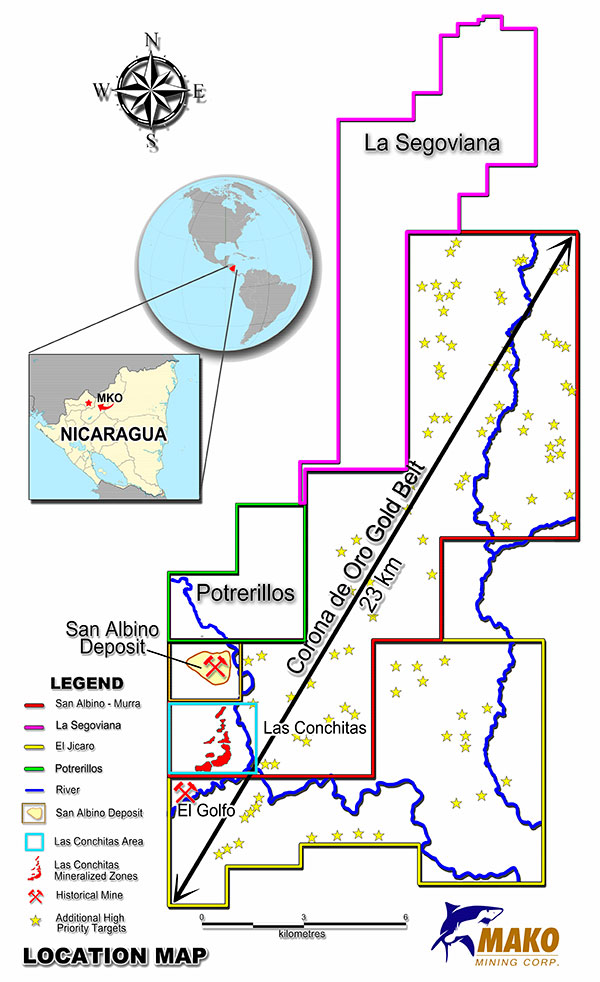 Forward-Looking Information:  Some of the statements contained herein may be considered “forward-looking information” within the meaning of applicable securities laws. Forward-looking information is based on certain expectations and assumptions, including Mako’s plans to operate in Nicaragua for many years to come; Mako’s first objective to use the remaining financial resources the Company currently has to finish construction of San Albino and to continue a targeted exploration campaign at Las Conchitas to the south; once expected cash flow from the mine begins, the Company’s aim to aggressively explore its 188 square kilometer land package, including the 16 identified prospects clustered around four historical workings (Mina San Cristobal, Los Encinos, Mina America and Mina Plata) and the Company’s intention to immediately dispatch an exploration crew to La Segoviana, to carry out both a reconnaissance examination of this newly acquired exploration area and to conduct a preliminary sampling of mineral prospects in order to define areas suitable for further exploration. Such forward-looking information is subject to a variety of risks and uncertainties which could cause actual events or results to differ materially from those reflected in the forward-looking information, including, without limitation, that the Company has sufficient remaining financial resources to finish construction of San Albino and to continue a targeted exploration campaign at Las Conchitas; that there is insufficient cash flow from San Albino to allow the Company to aggressively explore La Segoviana, to carry out a reconnaissance examination of the area and to conduct preliminary sampling of mineral prospectus in order to defined areas suitable for further exploration; ; political risks and uncertainties involving the Company’s exploration and development of its mineral properties; the inherent uncertainty of cost estimates and the potential for unexpected costs and expense; commodity price fluctuations and other risks and uncertainties. Such information contained herein represents management’s best judgment as of the date hereof, based on information currently available and is included for the purposes of providing investors with the Company’s plans and expectations regarding the exploration of the La Segoviana concession and the potential for expansion at its San Albino project as a result, and may not be appropriate for other purposes.  Mako does not undertake to update any forward-looking information, except in accordance with applicable securities laws.