To date, 5,491.90 meters (“m”) of drilling in 134 diamond drill holes has been completed within the Arras Zone, which is the area outlined by the Central and Northeast pits in the Company’s preliminary economic assessment (“PEA”), dated April 29, 2015 and available under the Company’s profile on SEDAR at www.sedar.com, with assays reported for 28 of these holes in this press release (see attached map).

The 2019-20 drilling program targeting the Arras Zone was focused on identifying shallow mineralization that can augment the initial phase of mining at the West pit.  The Company followed a systematic approach of drilling shallow holes every 20 m along strike and 20-40 m down dip.  The results indicate a zone of approximately 80 m along strike by 100 m down dip with grades and thickness that are variable within the zone.  Importantly, the Arras Zone remains open down dip with previous wide-spaced drilling intersecting the zone at over 600 m down dip.

The highlights of this press release are drill holes AR20-162 and AR20-166.  Both holes were drilled to test mineralization encountered in tunnel AR13-TNL-03, which had a couple of channel samples of vein material that assayed over 30 g/t Au.  Drill hole AR20-162 tested the surface expression of the vein exposed in tunnel AR13-TNL-03 and drill hole AR20-166 tested the same vein along the strike and down dip.

AR20-166 was collared approximately 36 m north and down dip from AR20-162 and intersected a zone with an estimated true thickness of 2.7 m approximately 1.5 m from surface.  The mineralized zone encountered in AR20-166 had a total of five significant intercepts although the drill hole had poor recovery and possibly encountered several historic workings.  The two highest grade intercepts were 63.10 g/t Au and 46.4 g/t Ag over 2.15 m and 28.40 g/t Au and 33.3 g/t Ag over 1.0 m (see attached cross section).

A diamond drill rig along with a production drill rig will continue to identify additional shallow mineralization and to quantify historic dumps along a previously tested ravine between the shallow and deeper portion of the Arras Zone (see attached map).  Results are pending from a total of 103 holes in the Arras Zone.

Mako is also pleased to report that mining at the West pit has recommenced after a six-week pause to implement safety protocols due to the COVID-19 global pandemic.  It is anticipated that mining will ramp up over the course of the next few months.

Akiba Leisman, Chief Executive Officer of Mako states “it is rare in modern gold mining to intersect more than 30 g/t Au over four meters estimated true width and only a couple of meters from surface.  It is encouraging to see positive results from drilling in the Arras Zone because the zone is not as well advanced as the zones within the West pit, where the bulk of the infill program was focused last year, and where initial mining has recommenced.  Today’s results and those to follow have the potential of improving the already robust San Albino gold project by bringing in high-grade and near surface ounces into the mine plan earlier than anticipated.”

History of the Arras Zone

Historic data indicates that the Arras Zone was discovered by the Spanish, with mining limited to superficial workings where veins outcropped and formed the southern dip slope; this may partially explain the sporadic continuity in the shallow drill holes.

A review of a 1948 report by Roger Peale indicates that the Arras Zone was one of the last areas mined at San Albino.  The area is described as being in production as late as 1943 and with several shoots extending 30 m along strike and 20 m down dip.  Overall, the Arras Zone is described as having a strike extent of 200 m and dip of 60 m and average width of 1.6 m.  Subvertical and low angle faults are described to have offset the veins. 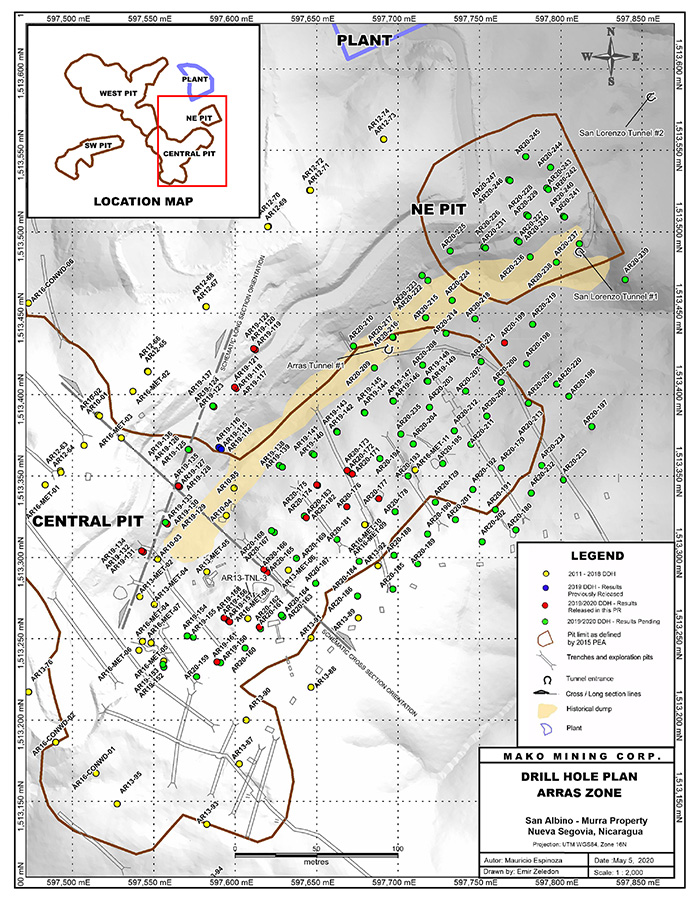 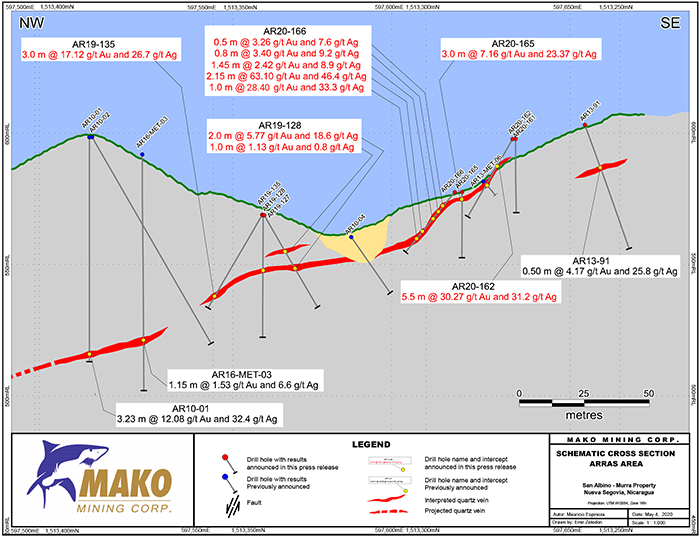 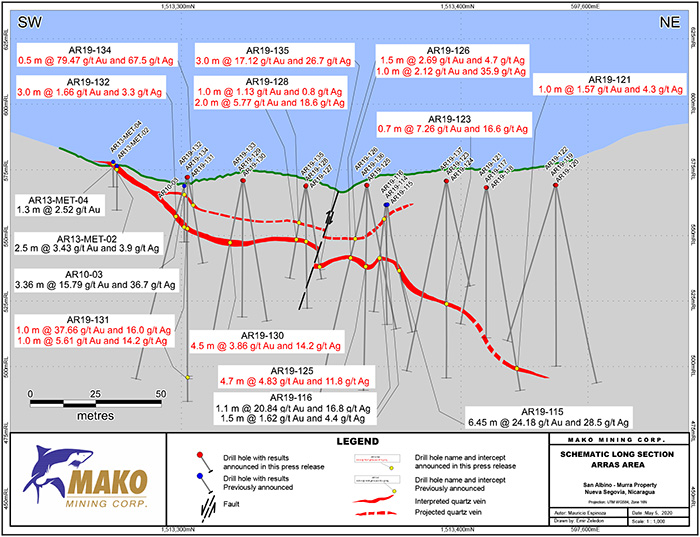 The mineralized intervals shown above utilize a 1.0 g/t gold cut-off grade with not more than 1.0 meter of internal dilution. * Indicates use of metallic screening method for assays. ** True width is estimated from interpreted sections.

Drill core was continuously sampled from inception to termination of the drill hole.  Sample intervals were typically one meter.  Drill core diameter was HQ (6.35 centimeters).  Geologic and geotechnical data was captured into a digital database, core was photographed, then one-half split of the core was collected for analysis and one-half was retained in the core library.  Samples were kept in a secured logging and storage facility until such time that they were delivered to the Managua facilities of Bureau Veritas and pulps were sent to the Bureau Veritas laboratory in Vancouver for analysis.  Gold was analyzed by standard fire assay fusion, 30gram aliquot, AAS finish.  Samples returning over 10.0 g/t gold are analyzed utilizing standard Fire Assay-Gravimetric method.  Due to the presence of coarse gold, the Company has used 500-gram metallic screened gold assays for analyzing samples from mineralized veins and samples immediately above and below drilled veins.  This method, which analyzes a larger sample, can be more precise in high-grade vein systems containing coarse gold. All reported drill results in this press release used the standard Fire Assay-Gravimetric method unless otherwise indicated as using the metallic screening method.  The Company follows industry standards in its QA&QC procedures. Control samples consisting of duplicates, standards, and blanks were inserted into the sample stream at a ratio of 1 control sample per every 10 samples.  Analytical results of control samples confirmed reliability of the assay data.

John M. Kowalchuk, P.Geo, a geologist and qualified person (as defined under National Instrument  43-101) has read and approved the technical information contained in this press release. Mr. Kowalchuk is a senior geologist and a consultant to the Company.

Forward-Looking Statements:  Statements contained herein, other than of historical fact, may be considered “forward-looking information” within the meaning of applicable securities laws. Forward-looking information is based on certain expectations and assumptions, including that the Company’s exploration and in-fill drilling programs including at the Arras Zone, will be successfully completed; that mineralization discovered at the Central and Northeast pits will augment the initial phase of mining at the West pit; that the Company will be able to identify additional shallow mineralization and to quantify historic dumps along the previously tested ridgeline between the Central and Northeast pits and the West Pit; that any outstanding assay results, including from the Arras Zone, will be as anticipated; that the mineralization discovered is anticipated to have a material impact on the economics of the San Albino gold project; that the Company will be able to successfully adjust its mine plan based on anticipated successful drilling results from the Arras Zone, and bring in high-grade and near surface ounces into the mine plan earlier than anticipated; that the geological model will continue to yield highly predicable results and that mining at the West pit will ramp up over the course of the next few months and such other risk factors as outlined in the continuous disclosure documents of the Company filed on SEDAR at www.sedar.com.  Such forward-looking information is subject to a variety of risks and uncertainties which could cause actual events or results to differ materially from those reflected in the forward-looking information, including, without limitation, the risks that additional satisfactory exploration and drilling results at the Arras Zone at San Albino will not be obtained; that the Company will not be able to augment its initial phase of mining at the West pit as a result of mineralization discovered at the Central and Northeast pits; that the PEA is preliminary in nature and there is no certainty that the PEA will be realized; the risk of economic and/or technical failure at the San Albino project associated with basing a production decision on the PEA without demonstrated economic and technical viability; that exploration results will not translate into the discovery of an economically viable deposit; risks and uncertainties relating to political risks involving the Company’s exploration and development of mineral properties interests; the inherent uncertainty of cost estimates and the potential for unexpected costs and expense; commodity price fluctuations, the inability or failure to obtain adequate financing on a timely basis and other risks and uncertainties. Such information contained herein represents management’s best judgment as of the date hereof, based on information currently available and is included for the purposes of providing investors with the Company’s plans and expectations at its San Albino project and may not be appropriate for other purposes.  Mako does not undertake to update any forward-looking information, except in accordance with applicable securities laws.