Drilling at the SW Zone at San Albino Intersects 62.04 g/t Gold Over 1.5 Meters (Estimated True Width) 15 Meters from Surface and Outside of the Delineated Resource

The objective of this drill program was to target the SW Zone at San Albino, where very limited mineral resources (approximately 0.4%) were estimated by Mine Development Associates (“MDA”), a division of RESPEC, out of Reno, Nevada.  A technical report for the updated mineral resource estimate (the “MDA Resource”) was filed in accordance with National Instrument 43-101, Standards of Disclosure for Mineral Projects (“NI 43-101”) filed under the Company’s SEDAR profile at www.sedar.com and available on the Company’s website at www.makominingcorp.com (see press release dated October 19, 2020).

Akiba Leisman, Chief Executive Officer of Mako states that, “when the MDA Resource was released, we stated that San Albino was open along strike and down dip.  As is the case with many areas of San Albino, the SW Zone required additional drilling to better understand the geology before delineating a mineral resource.  These results confirm the existence of near surface high-grade gold, which we expect to convert to mineral resources at San Albino as the drilling program advances.  Importantly, exploration is continuing at Las Conchitas to the south, where we also expect to find additional mineral resources.”

Specific comments on significant results reported in this press release are as follows:

Trench SA13-TR11-EXPPIT#1 located approximately 160 m along strike and to the southwest of SA20-443 (see attached drill plan) exposed a vein with a true width of 1.8 m grading 13.94 g/t Au and 18.9 g/t Ag, indicating additional strike potential which will be tested with drilling this year.

Detailed mapping of the area has identified multi-stage deformation structures, with the latest deformation event represented by NE-SW faulting.  The current interpretation indicates the faults may have displaced the vein in a manner that has upthrown blocks across the faults bringing the mineralized zone closer to surface than the previous down dip projections.

SA20-TR-51 encountered a high-grade vein with a vertical sample (estimated true width) grading 29.40 g/t Au and 28.0 g/t Ag over 0.7 m and appears to indicate the potential of another near surface vein with a strike length of at least 120 m (see attached drill plan).

Overall geologic mapping, surface sampling and limited drilling has identified a prospective area at the SW Zone measuring approximately 400 x 400 m, which is roughly the size of the current MDA Resource footprint.  A detailed understanding of the geometry and geology is critical to expanding mineralized zones for future mineral resource additions. This area is complex, with localized faulting, and will require close spaced drilling which the Company plans to conduct this year.

An aggressive drilling program is planned for the area with the objective of identifying additional resources within the currently permitted pit limit.  Approximately 7 kilometers of drill roads have been prepared for the upcoming drilling program.

The SW Zone currently remains open at depth and along strike (see attached sections).  Since 2020, the Company has only drilled a total of 371.30 m in 9 drill holes.  Several drill holes have encountered mineralized intervals with visible gold.  The Company anticipates receiving results in the coming weeks from remaining drill holes and will be released in due course.

The mineralized intervals shown above utilize a 1.0 g/t gold cut-off grade with not more than 1.0 meter of internal dilution. *Widths are reported as drill core lengths.  ** True width is estimated from interpreted sections. 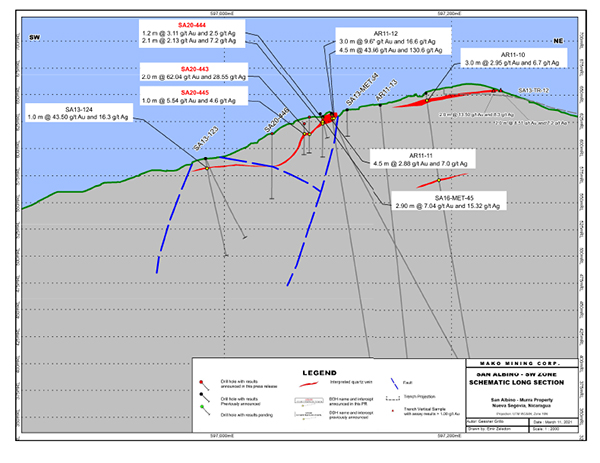 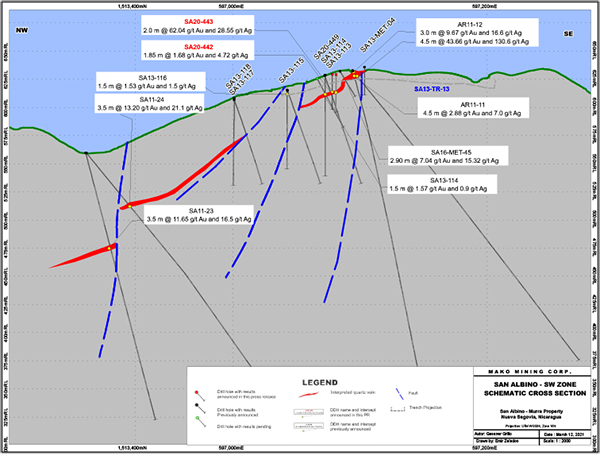 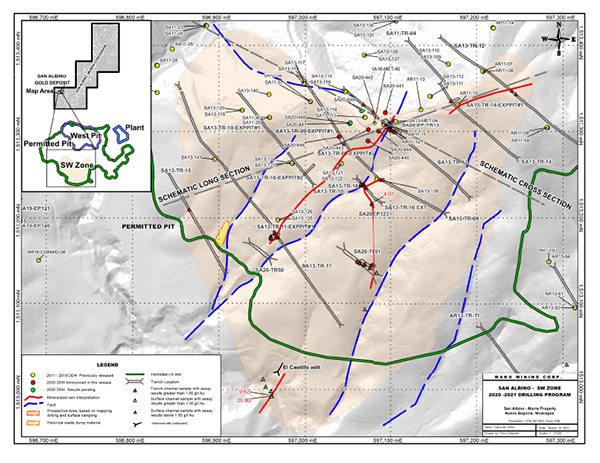 Drill core was continuously sampled from inception to termination of the entire drill hole.  Sample intervals were typically one meter.  Drill core diameter was HQ (6.35 centimeters).  Geologic and geotechnical data was captured into a digital database, core was photographed, then one-half split of the core was collected for analysis and one-half was retained in the core library.  Trench and surface channel samples followed a similar procedure as drill core sampling.  Continuous samples were collected using a diamond saw or rock hammer and chisel.  Care was taken to ensure a consistent channel width of 6 cm wide and 5 cm depth.  Individual channel samples range from 0.4 meters to 1.0 meters in length. Both drill core and channel samples were kept in a secured logging and storage facility until such time that they were delivered to the Managua facilities of Bureau Veritas and pulps were sent to the Bureau Veritas laboratory in Vancouver for analysis.  Gold was analyzed by standard fire assay fusion, 30 gram aliquot, AAS finish.  Samples returning over 10.0 g/t gold are analyzed utilizing standard Fire Assay-Gravimetric method.    The Company follows industry standards in its QA&QC procedures. Control samples consisting of duplicates, standards and blanks were inserted into the sample stream at a ratio of 1 control sample per every 10 samples.  Analytical results of control samples confirmed reliability of the assay data.

Forward-Looking Statements: Statements contained herein, other than of historical fact, may be considered “forward-looking information” within the meaning of applicable securities laws. Forward-looking information is based on certain expectations and assumptions, including the Company’s expectation that it will bring the San Albino into production quickly and efficiently, while continuing exploration of prospectus targets in Nicaragua; that the Company’s exploration and in-fill drilling programs will be successfully completed; that any outstanding assay results will be as anticipated; the potential for additional near surface veins; that the drilling program results confirming the existence of near surface high-grade gold will be able to be convert to mineral resources at San Albino as the drilling program advances; that the Company will find additional mineral resources at Las Conchitas;that the Company’s aggressive drilling program will identifying additional resources within the currently permitted pit limit;that the geological model will continue to yield highly predicable results; that although the Company’s production decision at its San Albino project is not based on a technical study supporting mineral reserves, and therefore not based on demonstrated economic viability, management expects economic viable production; that the Company will be successful in completing its mine construction at the San Albino project. and such other risk factors as outlined in the continuous disclosure documents of the Company filed on SEDAR at www.sedar.com.  Such forward-looking information is subject to a variety of risks and uncertainties which could cause actual events or results to differ materially from those reflected in the forward-looking information, including, without limitation, the risks that additional satisfactory exploration and drilling results at San Albino will not be obtained; the risk of economic and/or technical failure at the San Albino project associated with not basing a production decision on demonstrated economic and technical viability; that exploration results will not translate into the discovery of economically viable deposits; risks and uncertainties relating to political risks involving the Company’s exploration and development of mineral properties interests; the inherent uncertainty of cost estimates and the potential for unexpected costs and expense; commodity price fluctuations, the inability or failure to obtain adequate financing on a timely basis and other risks and uncertainties. Such information contained herein represents management’s best judgment as of the date hereof, based on information currently available and is included for the purposes of providing investors with the Company’s plans and expectations at its San Albino project and may not be appropriate for other purposes.  Mako does not undertake to update any forward-looking information, except in accordance with applicable securities laws.