The Las Conchitas South area has been the focus of drilling outside of the San Albino deposit and is the most advanced exploration area outside of San Albino.  At least three stacked gold-silver veins with a gentle dip have been intersected in drilling. The veins have a similar minerology and morphology to San Albino located 2.5km to the north. The deposit is open along strike and down dip.The latest drilling and geological modelling (March 17,2022 press release) suggest continuous mineralization over a strike length of approximately 430 metres and for 700 metres down-dip

Infill resource drilling is scheduled for 2022 which will form the basis for a maiden resource estimate later in 2022.

Several ore grade intercepts were made in the initial 2011 drill program.  Drill targets were based on anomalies encountered in the previous trenching program.  Additional, follow-up drilling on these targets was not completed untill 2019 since most of the exploration funding was dedicated to defining resources at San Albino. Between 2011 and 2018, most of the exploration activity on the property was low cost trenching and soil sampling.  During this period, a number of drill targets were identified for follow-up drilling once the funding became available. In 2019, the company started an intensive drilling  campaign, with the objective of defining resources.  To date 3,528 m of trenching and 35,520 m diamond drilling have been completed in the Las Conchitas South area. 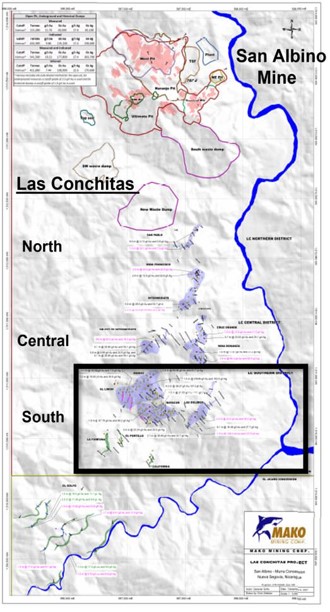