San Albino Near Mine

Four target areas have been identified within 500 m of the current San Albino Pit. All of these areas have nearly identical geology to the San Albino deposit which is currently in production.

The South West pit area is currently the highest priority since it is located within the curretly permitted pit and given sucess in delineating resources, it can be brought into production quickly.

Approximately 35,000 metres of drilling is planned for the near-mine exploration targets in 2022 with the objective of adding resources near the operating mine.

During the last 10 years, most of the exploration activities were dedicated to defining resources within the San Albino Pit. However drilling and trenching confirmed that the mineralization is still open along strike and down dip. Within the SW pit, several high grade intervals were intercepted in the initial 2011 drill program. Additionally, follow-up drilling was initiated during 2020/2021 drilling campaign with a goal to better undersand the geology before defining resources to the Company standards.

The Company has completed a definition drilling at the San Albino with the goal of delineating the geometry of mineral resources amenable to open pit mining. Several drill holes had significant intecepts outside of the previously defined pit limits and confirmed that mineralazitaion is still open along strike and down dip.

The exploration conducted by the Company confirmed the possibility of defining additional shallow, high-grade resources.

San Albino North target lies mmediately to the north of the San Albino Gold Deposit straddling two concessions, the San Albino-Murra and the newly acquired Potrerillos concession. While this area is within a stones throw of the pit, very little exploration has been completed within the area. Prospecting over the ground identified two target areas:

1) The Cerro Piedras Negra prospect - situated approximately 380 m north of San Albino. This prospect is comprised of two collapsed adits, ten hillside cuts, two small pits and eight relatively small adits, which appear to be following a vein over a distance of 1,300 m. In total, 20 samples were collected, mostly from historic dumps, with gold values up to 33.30 g/t Au.

2) The El Callejon prospect - situated just northwest from the Cerro Piedras Negra prospect . It is comprised of a collapsed historical adit, a shaft, four historical cuts and five dumps. Sampling of a dump in front of a collapsed tunnel yielded the highest result of 21.70 g/t Au and 175.0 g/t Ag. 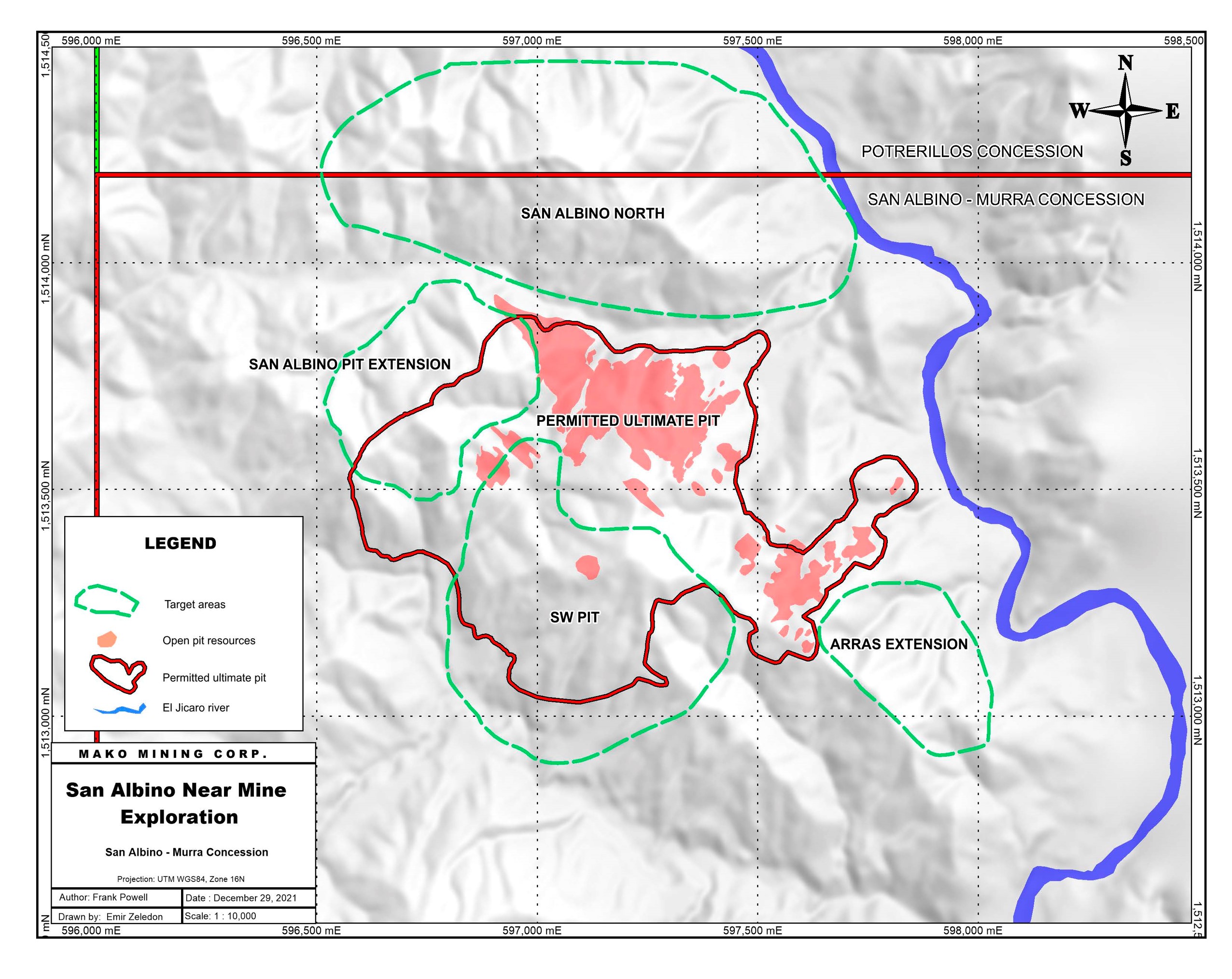